This is the Upper House of the Oireachtas or Parliament. It is called the Seanad in Irish or Senate in English and its members are called Senators. The modern Seanad Éireann was established by the Constitution of Ireland in 1937. The Constitution of Ireland is the fundamental law of Ireland and it established an Independent State based on a system of representative Democracy. Unlike the Dáil which is directly elected, Senators are partly appointed, partly indirectly elected and partly elected by a limited electorate. 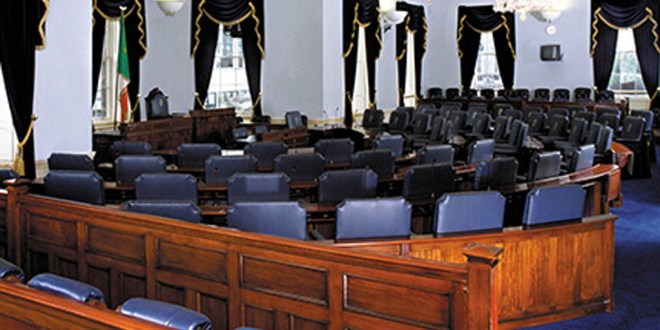 Nomination is restrictive for the panel seats with only Oireachtas members and designated ‘nominating bodies’ entitled to nominate. Each of the five panels consists, in theory, of individuals possessing special knowledge of, or experience in, one of five specific fields. In practice the nominees are party members, often, though not always, failed or aspiring Dáil candidates:

Under the Constitution of Ireland the general election for the Seanad must occur not later than 90 days after the dissolution of Dáil Éireann. The election occurs under the system of proportional representation by means of the single transferable vote (however in the panel constituencies each vote counts as 1000 meaning fractions of votes can be transferred). Membership is open to all Irish citizens over 21, but a senator cannot also be a member of Dáil Éireann. However, as stated above, nomination to vocational panel seats is restricted; while nomination in the University constituencies requires signatures of 10 graduates

In the case of a vacancy in the Vocational Panels, by death, resignation or election to the European Parliament, a Seanad by-election takes place. Seanad by-elections involve Oireachtas members only, which in the past have ensured that the Government of the Day decides the successful candidate. University vacancies, however, are filled under different rules, wherein the university in question holds a specific by-election.

In October 2014 a Seanad vacancy arose by the election to the European Parliament of Senator Deirdre Clune. I contested and won that election on the 10th of October and was honoured to be appointed to the Cultural and Educational Panel and a Senator in the 24th Seanad

Who Can Become A Senator?

Every citizen of Ireland over 21 years of age who is not disqualified by the Constitution or by law is eligible to be elected to the Seanad. Persons undergoing a prison sentence in excess of six months and persons of unsound mind are disqualified for election. Certain occupations are incompatible with membership of the Seanad, for example, members of the judiciary, senior officials of the institutions of the European Union, civil servants, whole-time members of the Defence Forces and Gardaí (police).

A general election to the Seanad must take place not later than 90 days after the dissolution of the Dáil (Lower House). The dates for the various stages of the election (nomination, polling, etc.) are appointed by order of the Minister for the Environment, Community and Local Government.

The Seanad returning officer (Clerk of the Seanad) maintains a register of bodies entitled to nominate candidates to the panels of candidates. To be eligible for registration as a nominating body, an organisation must be concerned mainly with and be representative of the interests and services of one or other of the panels. A body cannot be registered in respect of more than one panel. Organisations which are mainly profit-making concerns are not eligible for registration. The register is revised annually.